Most industries experience consolidation - there are few exceptions and the office products and supplies industry is certainly not one of them. In Part I of this series I explained my rationale for believing the aftermarket has passed a significant tipping point and then hinted toward the foundation that's been established for the aftermarket manufacturers to increase market share at the expense of the OEM's.

The Aftermarket, Office Supplies and a Major Tipping Point (Part I)

In this, the second part of the series, I will expand on why I believe the prospect for an upcoming battle for market share is motivating a new phase of consolidation as the OEM manufacturers endgame moves toward its final stages.

There are twelve companies on this list of OEMs but, a quarter of them (Lexmark, Samsung and Sharp), are already in the process of being merged into other entities.

Hewlett Packard split into two separate entities at the end of 2015 and Xerox is doing the same in a process that's expected to be completed by the end of 2016. Both of these restructurings were designed to separate the mature hardware and supplies business from the (perceived) higher growth potential of the consulting and services businesses. In establishing standalone enterprises focused on printing and supplies both entities are (or will be) better positioned for the merger endgame!

I believe this group of OEM manufacturers will continue to consolidate and, within a few years, it's possible we could be down to as few as four or five companies. This is typical late-stage industry consolidation behavior.

Sharp, with $20 billion in global sales, had been in a precipitous decline losing over six billion dollars of its net asset value between 2010 and 2016. Foxconn stepped in to rescue an otherwise bankrupt corporation, mainly because they wanted the screen display technology for the Apple iPhone they assemble, and most likely not the relatively small office printing and supplies business. It's difficult to see Foxconn (as a contract manufacturer) committing longer term to the office products business so, either expect to see it closed down, or sold to one of the remaining Japanese OEM's.

A $3.6 billion cash offer was simply to good to ignore. Lexmark, having exited the ink business in 2012, already knew it did not have the scale to compete with the larger players and did not have the resources, capital structure, or energy, to survive as an independent player in the merger endgame. In selling the business, it appears they acted in best interest of their shareholders.

HP didn't waste any time after it's restructuring with the announcement of its acquisition of Samsung's printer division.

Think for a moment about this development.

Perhaps it really was motivated by a desire to establish a stronger presence in the so-called "A3" market as we've read in the press. We know Managed Print Services, widely adopted in this channel, are a "sticky" sale where the isolated cost of an ink or toner cartridge is obscured under the complexity of a cost-per-page model bundling cartridges with service, repair, and (sometimes) even hardware. Long-term contracts are certainly an effective way to protect market share from circling predators!

But think also about the following;

Hewlett-Packard knows (along with all the other OEMs) they have lost the battle to eliminate aftermarket products from the competitive environment and that they need to position themselves to defend against the increasing threat posed by the aftermarket manufacturers and Tier-2 resellers.

Whatever icing is put on the cake to explain the importance of a past and future relationship with Canon, the acquisition of the Samsung Printer Business is a massive development.

I regularly use my example of a $100 OEM cartridge sale and its associated manufacturing cost of $10. With $90 of gross margin, you'd think the OEM's would be in a strong position to defend their market shares.

However, take a look at the chart below - I think it helps demonstrate another compelling reason why the Samsung acquisition is to take place. 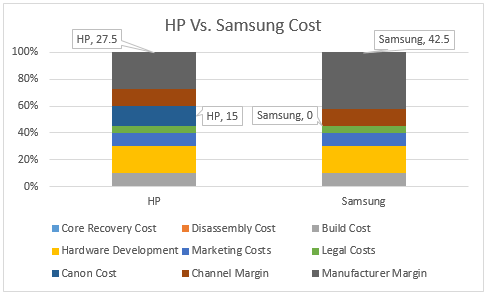 We know (give or take a bit) it only costs around $10 to make a new-build cartridge that has a retail sell price of $100. However, the fully loaded cartridge cost is estimated at over $70 once hardware subsidies, marketing costs, legal costs and channel distribution (reseller margins) are all factored in. Look at the call-out's in the above chart. A portion of HP's current cartridge cost (when manufactured by Canon) has to be the payment that's made to Canon. We don't know what that actual number is but, whatever it is, it's not part of the Samsung cost structure. In our model, HP will improve its margin on cartridges from 27.5% to 42.5% after Samsung is fully incorporated. All the other costs are assumed to be the same but, in the future, HP will not be paying Canon a share of the value chain as the industry moves closer to its endgame.

Now let's take a look at the competitive threat by introducing three aftermarket elements as shown in the chart below. 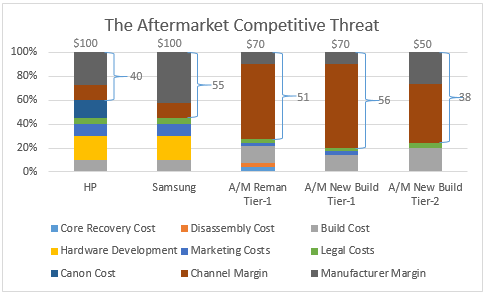 1. The Tier-1 resellers selling aftermarket remanufactured cartridges generally sell at about a 30% discount to the OEM cartridges and there are a total of $51 margin dollars in the value chain assuming a $70 sell price.

2. If the Tier-1 resellers elect at some point to sell new-build aftermarket cartridges, then our assumption is they will also capture the incremental margin dollars resulting from the manufacturers lower cost of goods sold increasing their share to 88% of the $56 then available. It's not expected there would be a reduction in retail prices.

3. With the Tier-2 resellers represented in the final column of the chart, this is where it starts to get interesting. At an average 50% discount to OEM retail prices and a 30% discount to aftermarket Tier-1 prices, there's still room for $38 margin dollars or 76% of the projected sell price. Furthermore, this is a channel where the OEM has less influence to distort normal competitive behavior. 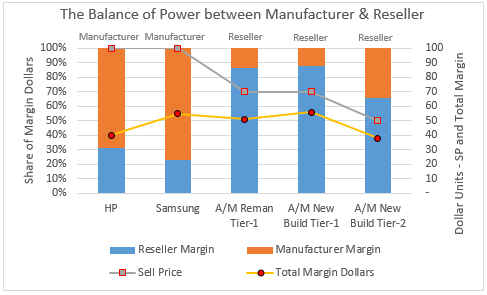 There are three important points:

We've already established the Samsung acquisition will reduce HP's cost as Canon is cut out of the picture. However, because HP (along with all the other OEM's) has the balance of power in their relationship with the resellers, none of this increase in their margin will be shared with the reseller and retail prices will not change.

2. Now let's look at the aftermarket and the existing remanufactured cartridge model through Tier-1 distribution

Over 80% of the margin dollars go to the reseller so they clearly have the balance of power in their relationship with the aftermarket producer.

At this time, Tier-1 resellers have not adopted new-build compatible cartridges. Perhaps the OEM's dominant power position has been leveraged to exert influence - who knows! However, even if this should change for any reason, then any improvement in the total margin dollars will most likely go to the reseller because they have the balance of power and will demand the extra margin dollars while maintaining the ability to keep the sell price unchanged.

The potential adoption of New-Build aftermarket cartridges by the Tier-1 resellers would be unlikely to represent an increased threat to the OEM's and their existing market shares.

This is the sector of the resale channels from where the potential threat of disruption comes. The OEM's have much less influence over the behavior of this sales channel and, when combined with the value proposition, it clearly has the potential to start to erode OEM market share. As shown in the graphic below, new-build cartridges have a lower cost, unrestricted supply, potentially less legal concerns, and higher quality than remanufactured cartridges. Tier-2 resellers leveraging these attributes should be able to establish a clear competitive advantage over the OEM's and the Tier-1 resellers of remanufactured products. 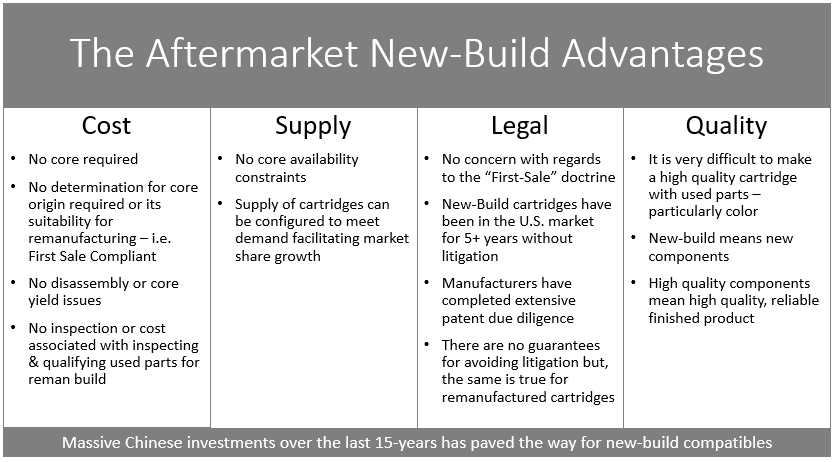 I'll be exploring more with regards to the Tier-2 resellers opportunities and tactics for developing increased market share in later blogs in this series. Have no illusions - there's no silver bullet, overnight solution to accomplish this! It will be hard work and, anything short of the service and value proposition currently provided by the Tier-1 resellers, will be inadequate and will fail.

It's the threat of loss of market share that's contributing to the mergers and acquisitions activity now taking place between the OEM's, as the strongest acquire the weakest and attempt to extract as many costs from the business model as they can. The OEM's can't afford to lose market share and they can't afford to protect it in a protracted price war with the resellers. Given that it's unlikely the Tier-1 resellers will make any change to the existing pricing model, then the threat can only come from the Tier-2 sales channels.

For additional reading on the state of the office products and supplies industry, and to help develop a better understanding as to why there are still great opportunities in the office products and supplies vertical, please click on the button below and download a free copy of our e-book. This contains valuable information on the industry, how to take advantage of the current conditions and to help understand a strategy for achieving profitable sales growth.