The Markman Order and an Emerging Expectation for Non-Infringement

For more background related to this subject, readers can review an earlier publication from December 2018, in which we posed the hypothetical question whether the Respondents' in the investigation were closing in for the kill, and whether Canon may have been staring down the barrel toward a rare loss.

The sides had previously prepared and argued their positions for claim construction at the Markman hearing that took place on August 31, 2018. The Respondents' still participating in the complaint then filed a flurry of motions for Summary Determination for non-infringement toward the end of November 2018.

The Respondents' sought the claim construction necessary to determine that Canon's patents were not infringed and, presumably to protect their base in the event of failing with their arguments, Ninestar also filed a motion for summary determination based on invalidity of the patents asserted in the complaint.

The five disputed claim terms are shown in the charts below, complete with Canon's, the Respondents', and the Staff attorneys' previously proposed claim constructions. More significantly, however, they now also include the all-important Administrative Law Judge Lords' ruling for construction of the claim terms that will now govern the remainder of the case. 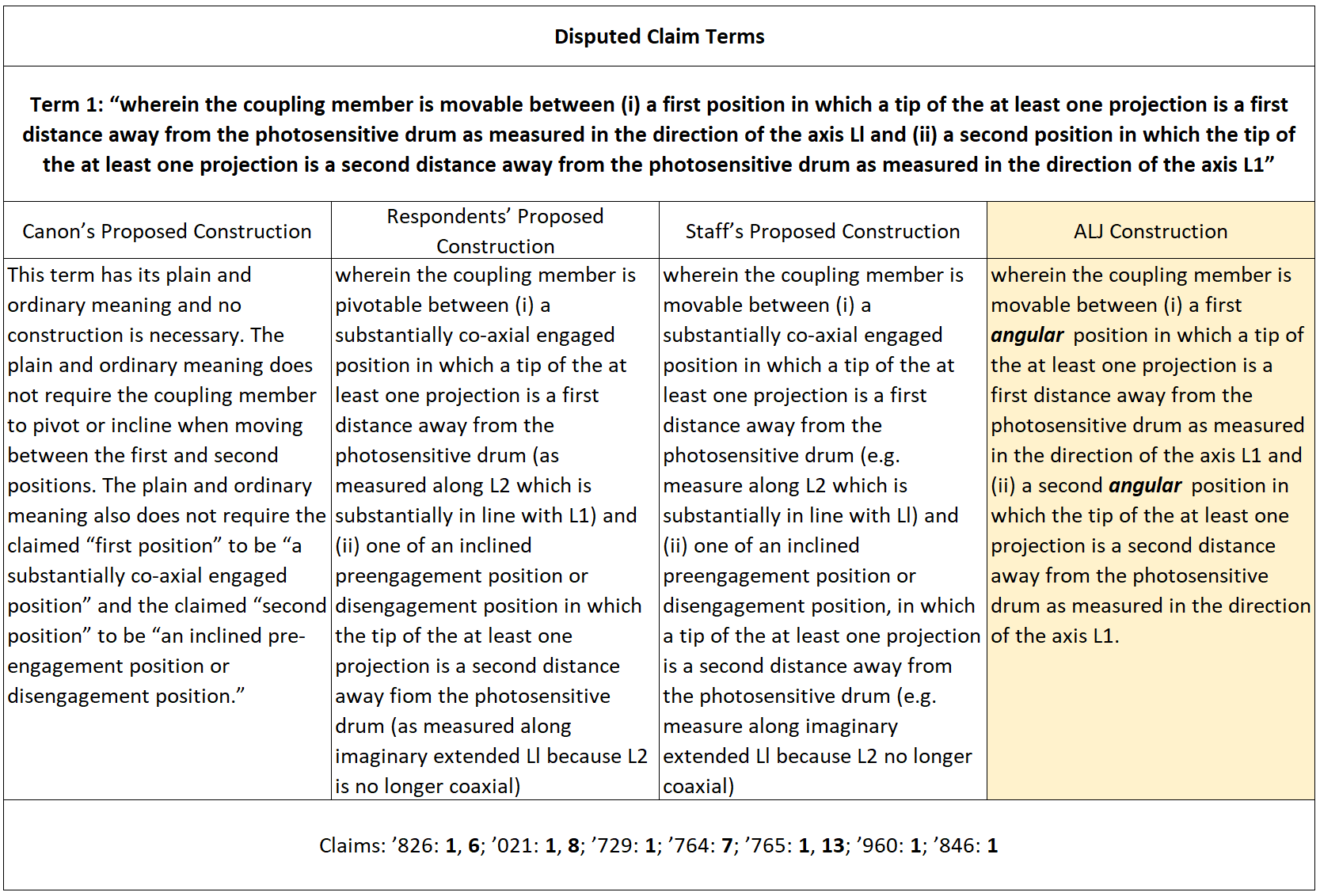 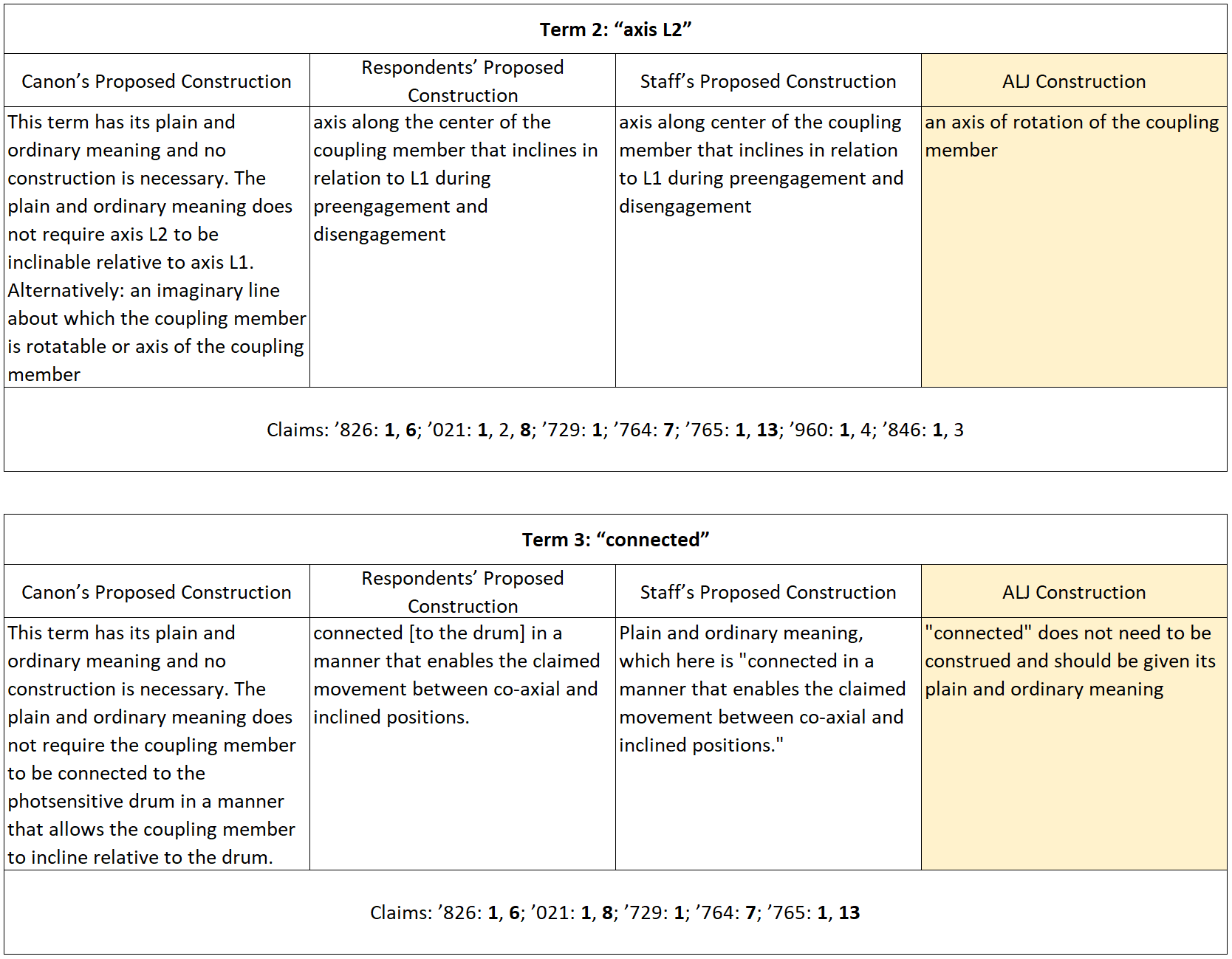 We believe the key claim term determination to focus on from the Markman Order is the first one, which clearly states the coupling member is movable between a first angular position and a second angular position. We believe this to be the key determination the Respondents' have been seeking since the beginning of the case in order to support their argument for non-infringement.

It would therefore appear, under the construction of the claim terms that have been adopted, there cannot be any infringement, and that Canon must eventually lose its argument against the non-defaulting Respondents'.

We are not qualified to state this to be a definitive outcome, only that this is what appears to be the outcome of the order. What we do know, however, is that the parties must quickly  "meet and confer concerning the effect of the adopted constructions on the pending motions for summary determination and the hearing in this investigation".

Then, no later than this Friday March 8, 2019, the parties must file a joint submission to, firstly, identify each motion for summary determination that has been rendered moot by the adopted claim construction and, secondly, for each motion that a party contends is still viable, to indicate whether the motion is "ripe for adjudication" or whether any party contends that supplemental briefing is necessary to address the adopted claim constructions.

This March 8, 2019 filing should provide more clarity with regards to the position of the two sides that follows this Markman claim construction order, and whether our conclusion for non-infringement of the patents asserted in the complaint is accurate.

We will continue to closely monitor the upcoming filings in an effort to see which twist the investigation is next destined to take.

To access our consolidated paper explaining the International Trade Commission's investigation into the third complaint in six years filed by Canon against aftermarket manufacturers, importers, distributors, and resellers of new-build cartridges, please click the image below. 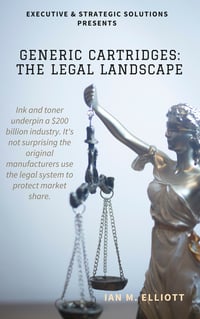 1 The Staff attorney at the ITC is a neutral third party, whose position is often persuasive to, but never binding on, the ALJ and the Commission.

2 A Joint Stipulation was entered into on September 27, 2018 whereby the Parties agreed the five claim terms in dispute, and that if a controlling claim construction ruling made clear that at least one disputed term of every claim asserted against the Products requires the claimed coupling member to be capable of pivoting or inclining with respect to the photosensitive drum, then the Products would not infringe any of the claims asserted against them under that construction and vice versa.

To ensure you don't miss any of the important developments in this major story affecting products that underpin a $200 billion per year industry, please sign up for our blog using the button below.

Ian Elliott has over 35 years' experience in the imaging supplies industry and, at prior places of employment, has faced direct involvement in OEM versus aftermarket patent litigation. Mr. Elliott is not a patent attorney, is not qualified to provide legal advice, and this article is not an attempt to provide any kind of legal advice. It represents no more than his views and opinions based on decades of relevant experience.

Access our proprietary Information Technology scorecard. Select answers from pre-populated drop-downs and develop your own task list and priorities for implementing a fully integrated software platform.

Once an integrated technology platform is established, then start to have some fun transforming your business, leveraging business intelligence alongside your personality in your market.