The SP Richards and Essendant Merger & What it Means for Resellers!

On April 12, 2018, the office products industry finally learned what many had long predicted; that Essendant and SP Richards had agreed to merge their businesses into a single entity with a combined $7 billion in annual sales. Most were probably not surprised to learn of the deal as the prospect of a combination for the past few years has been more a question of when, rather than if.

Three years ago, Essendant had a share price of $40 and a market capitalization of approximately $1.5 billion. This compares to $280 million at the time of writing which represents a decline of more than 80% over the three-year period. During the same time frame, sales declined 5% from $5.3 billion to $5.0 billion. However, more telling than the fairly modest decline in sales was the nearly 70% decline in EBITDA from $259 million to $85 million. This is the key indicator underpinning the 80% decline in enterprise value.

SP Richards is a division of General Parts Company, a global distributor focused primarily on auto parts with annual sales of $16 billion, and a market cap of $13 billion. The SP Richards portion of its business makes up around $2 billion (12% of GPC sales) and is only 40% the size of Essendant's top line.

In its most recent quarterly earnings report for the quarter ending March 31st, 2018, General Parts Company disclosed the Business Products Division (SP Richards) had experienced another 5% decrease in sales.

However, of particular note is that SP Richards, with only 40% of Essendant's sales, is valued more than two times higher. Essendant's deal value of $324 million represents around 2.7 times their adjusted 2017 EBITDA of $120 million, whereas SP Richard's valuation of $680 million is around 6.8 times what we estimate to be approximately $100 million of EBITDA.

How did we estimate SP Richards EBITDA? 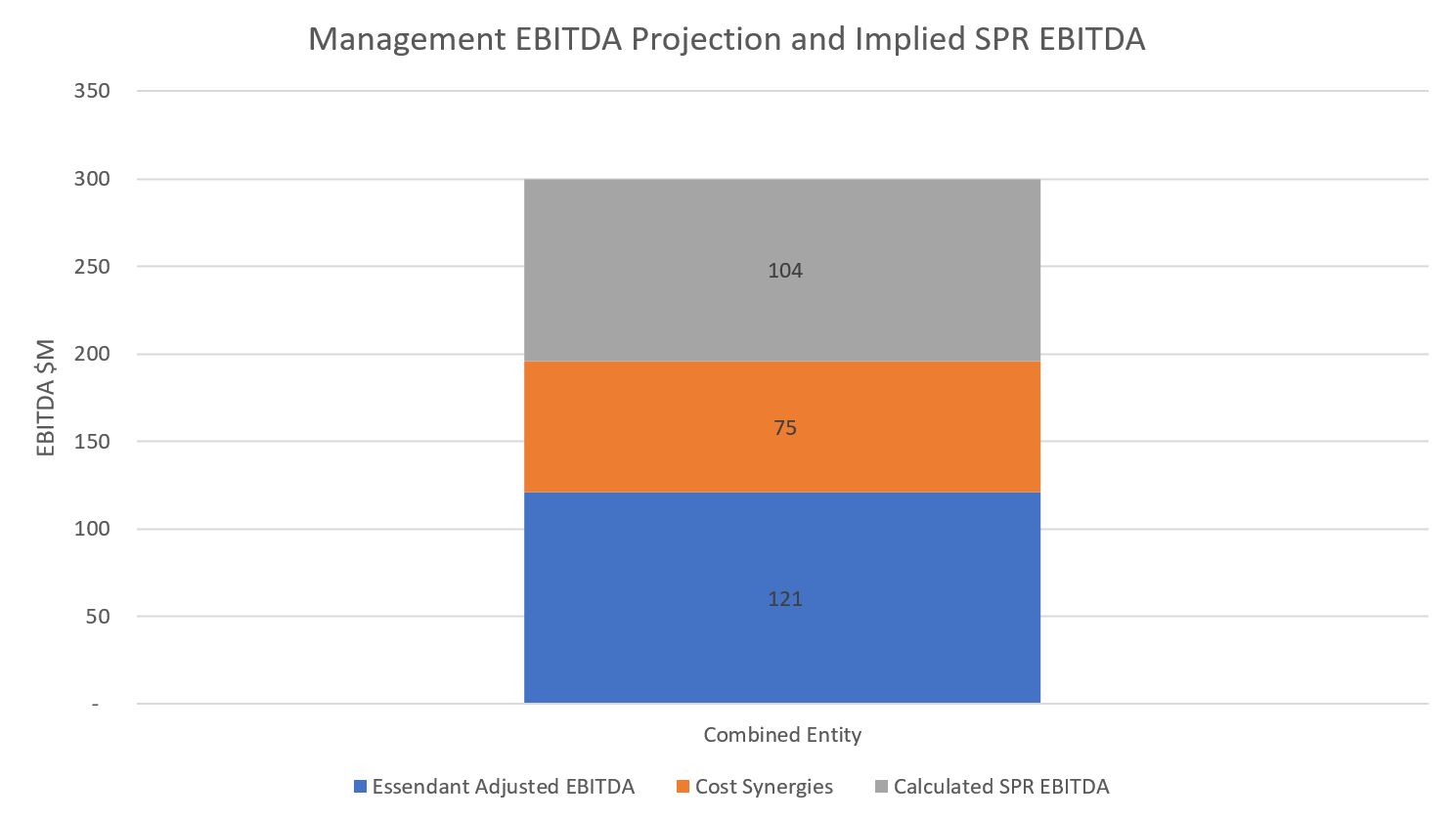 Essendant is financing the deal with a combination of debt and shares. They will pay General Parts Company $347 million at closing and issue approximately 38.5 million new shares. This will result in GPC becoming the largest shareholder with 51% ownership.

The deal will increase total debt from around $500 million to $850 million which, assuming management achieve the targeted $300 million in EBITDA, still results in a manageable debt to EBITDA ratio of around 2.8. The deal is proposed to take place via a "Reverse Morris Trust" structure and the "new" entity will remain listed on NASDAQ under the existing ESND symbol.

You can access the management presentation explaining the SP Richards deal structure from this link.

Management has identified $75 million of synergistic savings to be implemented at a cost of $50 million. It's not difficult to believe these savings are achievable as distribution centers and sales and marketing infrastructures are consolidated. It's also not difficult to believe there will be $100 million in working capital improvements as inventories are reduced, freeing up more than sufficient cash to finance the cost of implementing the synergies.

On the face of it, the combination of Essendant and SP Richards makes a great deal of sense. 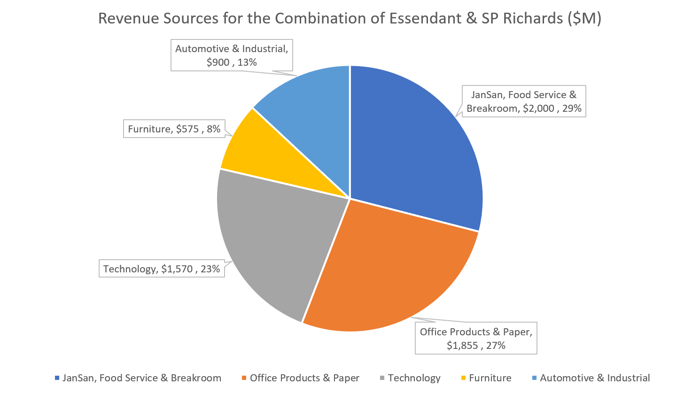 What are the risks?

Of these two risks, the lesser of the two would appear to be the cost reductions and working capital improvements. It seems logical these business improvements are "real" and that management has been reasonably conservative, both in terms of the dollars and the time required to achieve them.

While the overall market the wholesalers participate in may be $100 billion plus, there's no denying it's a mature market that has started to shrink. Furthermore, it's intensely competitive, with Amazon making significant inroads into the coveted B2B channels that Essendant and SP Richards depend upon. A combination of market shrink and reduced sell prices could have a big impact on the sales outlook.

In the scenario shown in the chart below, a 5% annual decline in sales reduces the top line from $7 billion to $5.7 billion over 5 years. Usually, as sales decline, profitability also decreases as fixed costs gradually make up a higher proportion of total costs. So, in combination with a shrink in the top line a reduction in EBITDA, (for example) from 4.3% of sales to 3.5%, would reduce EBITDA by a third to $200 million. Assuming an unchanged debt level of $850 million, leverage will increase from a conservative 2.8 times EBITDA to a more concerning 4.3. 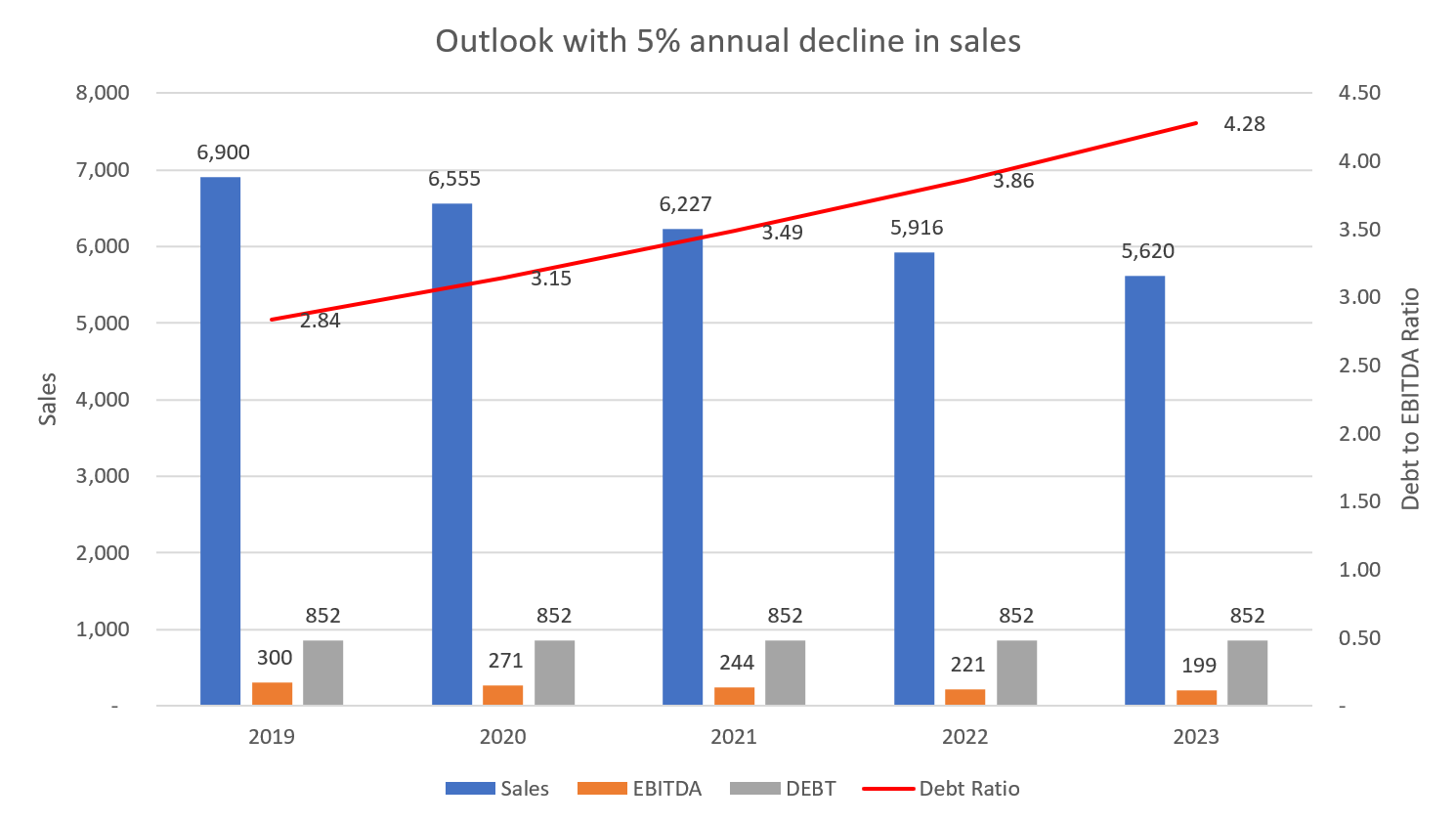 Without some strong initiatives from management to develop sales channels to maintain, or even grow, the top line it's not difficult to imagine this scenario could easily occur.

What could mitigate this risk?

The future of Essendant is dependent on the success of its resellers. With the deal document disclosing Essendant has 29,000 customers and SP Richards 9,700, this is where the business combination will either succeed or fail. Assuming for a moment there's a 100% overlap in the customer base, then the new enterprise will still have 29,000 customers.

Providing effective support and programs to the resellers, particularly the smaller ones that have the greatest need, could mean the deal becomes a resounding success.

In the growth scenario shown in the chart below, a 2.5% increase in sales per year results in the top line increasing 10% to $7.7 billion over 5 years. Also, in leveraging the synergies obtained through the overall business combination, it's not unreasonable to believe a modest increase in profitability couldn't also be achieved so long as the top line is growing. Furthermore, if Essendant can effectively support the smaller resellers, typically they will make larger gross margins in this customer segment further improving overall performance. 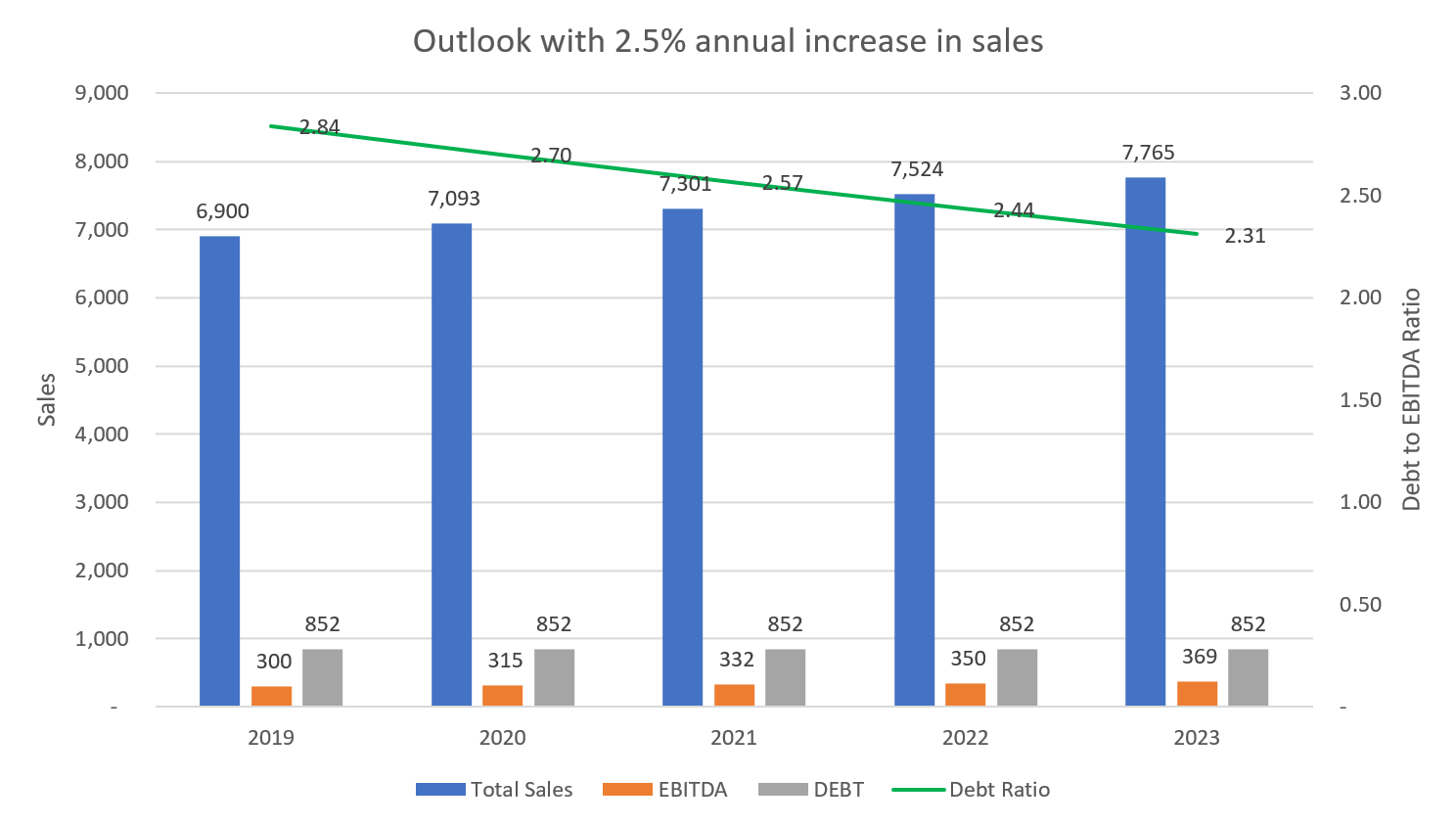 For sure, some of these profits would have to be reinvested in programs that are truly effective in helping the resellers grow. The vast majority of the office products industry (excepting the OEMs but including the wholesalers and resellers) has been slow to adopt effective digital strategies and it's this shortcoming that's hurting the resellers most.

Fix this and mitigate the risk to the top line thereby maximizing shareholder returns. Fail, and watch the top line shrink, EBITDA decline, debt leverage increase and, 5 years from now, we'll be witnessing a single wholesaler in no better shape than the two are currently in.

Unfortunately, in this scenario, Amazon will be likely to be walking all over Essendant as well as the resellers who are now counting on Essendant to finally step up and help them enter the digital era.

SP Richards enjoys more than two-times (5.2%) the EBITDA percent that Essendant currently earns (2.4%). So, in addition to the $75 million of identified deal synergies, what can Essendant learn from SP Richards best practices in order to prevent the combined entity from sliding down to the current level of profitability earned by Essendant?

All the technology necessary to upgrade small resellers to permit them to compete more effectively with Amazon and the big-box resellers (such as Office Depot and Staples) is available. The issue is its deployment in a form that relatively technophobic resellers can adopt and then use effectively to help win market share.

The new Essendant must leverage its scale to better support its resellers. Shipping and handling fees are a constant source of concern at the reseller level and stabilization of policies and costs in this area would be likely to go a long way in supporting resellers and their growth ambitions.

Closing the deal is contingent on shareholder and regulatory approval although it's unlikely either of these potential obstacles will prevent the transaction from taking place. The success of the deal in the future is therefore likely to be measured in terms of management's ability to execute the cost reductions and stabilize the top line.