Historically, goods and services have been pushed into the stream of commerce, with the consumer having little say in the format of the configuration of the product or service it's interested in. In a series of potentially self-serving configurations controlled by the vendor, the consumer has always had to choose the one that appears to be the closest to matching its needs. 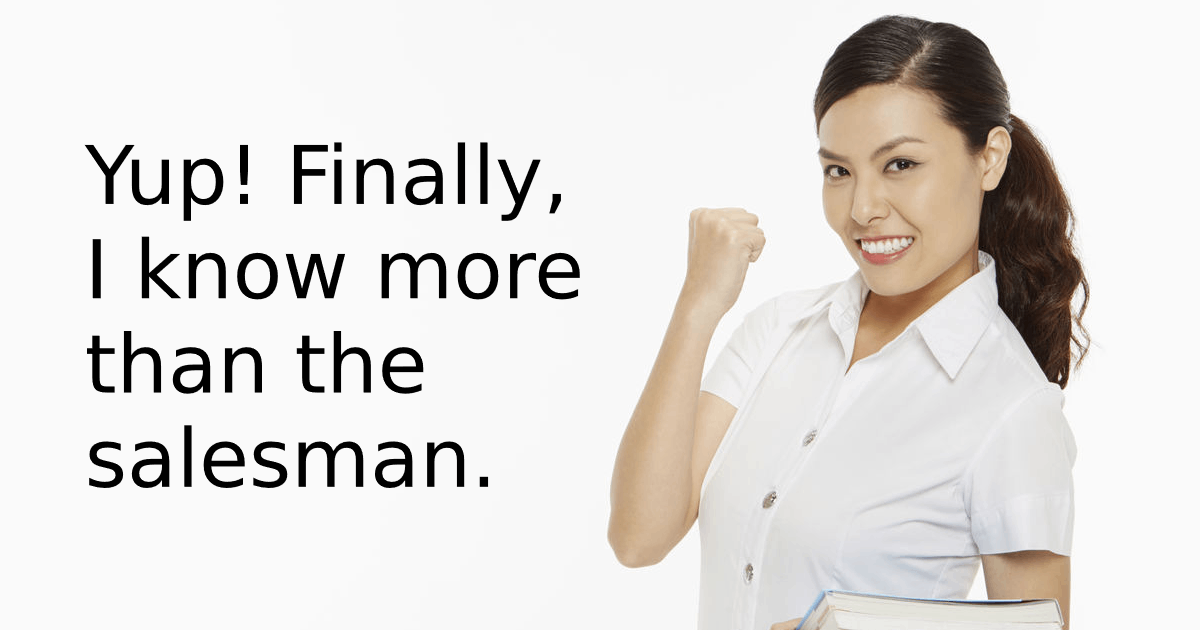 Oftentimes, in the earlier era when access to information was more restricted, a customer would be forced to rely on the advice of a salesperson to make its selection of a product or service. In those circumstances, where the seller has more control than the buyer, it's possible for the consumer to be taken advantage of.

The salesperson is generally motivated by compensation and his employer can slant the compensation plan toward the sale of products best-suited to achieving their own goals rather than those of their customers.

Because it's likely the salesperson has been motivated to sell the configuration that benefited him or her, even over the best interests of their customer, the customer can end up with a product that is not optimized for their requirements.

So long as there's competition for a product or service, the supplier walks a fine line between the temptation to exploit its customer and the risk of eventually losing the business (and perhaps its reputation) to a competitor that doesn't. It is the existence of competition and the risk of losing customers that is expected to keep the system honest.

Despite the competition, it's still possible for elements of exploitation to creep into the overall value proposition.

There are two key elements businesses focus on in the business cycle. First customer acquisition and, second, customer retention.

In order to fulfill its business objectives, the suppliers' initial offer must be attractive, and the value proposition clearly understood by its target customers. Historically, the salesperson has played a significant role in this process.

Smaller, less sophisticated companies tend to offer less complicated value propositions. These propositions are simple for customers to understand and to adopt but, as a result, the companies offering them are exposed to competition that serves to put pressure on their prices and, usually, also on their profits. Furthermore, the less complex the value proposition, the less opportunity there is for customer-entanglement strategies, meaning it is less difficult and less costly for customers to switch their suppliers. This is the typical scenario that explains why smaller businesses tend to experience higher customer churn rates than larger businesses.

Usually, there is a strong inverse relationship between the complexity of the value proposition and the customer retention rate. The greater the underlying complexity the higher the retention and vice versa.

Larger companies have the ability, and the resources, to develop complex solutions designed for maximizing long-term retention rates. They also have the foresight to implement these solutions in a series of steps that simplify the adoption process and don't overwhelm customers. Dealers and distributors can then be trained to sell these solutions into local markets in order to maximize customer acquisition rates.

The larger, more sophisticated companies generally try to make their propositions as attractive and simple as possible so they can maximize their customer acquisition rates. They will then work on their retention strategies, focusing on up-sell and cross-sell opportunities designed to entangle themselves long-term with their customers. This approach typically serves as an effective strategy for ensuring high retention rates because it also serves to increase the indirect costs a customer faces in switching to an alternative supplier.

Clever suppliers have a good understanding of the indirect expenses their customers' face with a vendor change, especially those suppliers who have successfully entangled themselves in multiple facets of their customers' business. As suppliers achieve their entanglement goals they typically find they have placed themselves in a position to charge more for their services. At least, that is, until the threshold a customer decides it's worth going through the pain of making a change is reached.

However, even this retention-risk can be headed off by suppliers who are closely tuned to customer feedback signals about the value proposition. Long before a customer reaches the threshold for switching suppliers it's likely to be sending signals, direct or indirect, about increasing levels of dissatisfaction. A clever supplier will be acutely aware of these signals and will adjust its value proposition to head off the ultimate danger of a customer loss.

Selling a copier machine or printer without bundled services does not represent a "sticky" sale. It's simple for a customer to compare the proposed transaction with proposals from alternative suppliers and to negotiate a better deal. The manufacturers and resellers, for understandable reasons, don't like this scenario and have developed alternatives to avoid being boxed into this corner because they know there's always someone prepared to accept lower margins and cut them out of a deal.

It is this situation that has led to the manufacturers developing "ecosystems" which, over time, become deeply embedded in customer operations. These ecosystems include equipment, supplies, service, and repair, plus software to help manage workflows and improve efficiency, all of which are then bundled together in return for a monthly fee. This means it becomes far more difficult for customers to compare competing solutions because they all have their own nuances and features that carry different values.

Furthermore, employees become ingrained in the use of the different components that make up the ecosystem and become resistant to change. This resistance is compounded by the owner's fear of the disruption any change of ecosystem could lead to and all the hidden costs associated with that disruption. At this stage of the business cycle the supplier has achieved its objective and positioned itself to maximize the profits earned from the provision of its services. The clever supplier knows there will be enough warning signals to adjust its tactics if the risk of customer losses approach.

Why isn't this strategy going to continue to work?

Readers could be forgiven for thinking we've described a sales strategy with ongoing longevity and be wondering what, if anything, could disrupt this. However, the reality is, this legacy sales strategy is becoming increasingly ineffective. Resellers who may comfort themselves with the relative stability of the past, and who continue to be reluctant to recognize the significance of changes already underway will, sooner rather than later, be rudely awakened.

Despite the deployment of "sticky" ecosystems that users have been trained to depend on for their operational efficiency, ecosystems that simultaneously accomplish the vendors' goal for high customer retention rates, there are multiple forces for change accumulating that will overwhelm these barriers and turn the industry on its head.

The direction of change is being driven by:

Consumers are driving the change away from a push economy toward a pull economy. They will no longer tolerate restrictions or additional costs that result from goods and services that don't match their requirements. Instead, they will simply seek out alternatives that do.

The direction of change is being facilitated by:

The pace of change is being held up by:

These holdouts are the elements clinging to the push economy, either unwilling or unable to adapt to changing market conditions.

1. None of the change forces will be stopped or reversed. In fact, the pace of change is likely to accelerate. As it does, those prepared to embrace and adapt will come out ahead, and those that try to cling to past practices will fall.

2. As the economy continues to convert from push to pull, consumers will increasingly reject solutions that result in them having to pay for excess capacity. Consequently, as the "pushed-supply" of excess is eliminated and replaced with the "pulled-demand" for appropriately sized alternatives, the propensity for legacy suppliers to configure their products and services in such a way as to force customers to buy more than they need, will be eliminated.

3. Elimination of excess translates to lower costs for consumers. Lower costs for consumers mean lower revenues for suppliers. If a shrinking market weren't enough of a problem to contend with, the traditional barriers to high churn rates will no longer be enough to slow the decline, meaning customer losses will combine with the shrinking market to accelerate the impact. This scenario will have profound implications for the legacy manufacturers as well as the legacy resellers.

To learn more about the reseller's value proposition, the prerequisites for a technology platform, and the importance of developing web traffic, sign-up for our blog to receive automatic notifications as we publish new, directly related content.

You may also be interested to access to our resource page, "Crafting and Promoting the Resellers Business Strategy" or, to learn more about the full scope of this material, and to access in a downloadable e-Book format, please click the cover image below.

Access our proprietary Information Technology scorecard. Select answers from pre-populated drop-downs and develop your own task list and priorities for implementing a fully integrated software platform.

Once an integrated technology platform is established, then start to have some fun transforming your business, leveraging business intelligence alongside your personality in your market.