Mergers and Acquisitions and the Office Imaging Supplies Industry 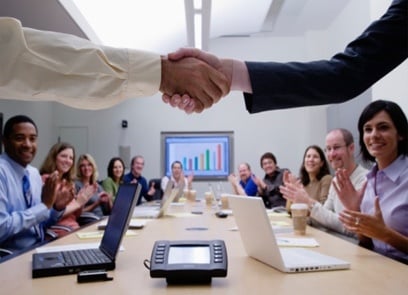 As would be expected in a mature industry, imaging supplies is deep into its natural business cycle with manufacturing, distribution and retail all having experienced significant consolidation.  In each of these channels there are only a small number of large organizations remaining.

The typical consolidation path is usually accompanied by reduced profits as the remaining players fight for market share and, as government regulators step in, further consolidation is restricted. On the face of it, and at this stage in the office supplies business cycle, there may therefore be expected to be less options for future M&A activity.

However, as will now be discussed, some aspects of this industry may be unusual compared to other mature industries.

How many 30-year old industries can generate 80-90% GM from any of their products?  Normally competition would have eroded these margins to much lower levels. However, because high margins can still be earned on imaging supplies and, as will be discussed later, because distortions in the distribution model exist, there are pent up forces for change that cannot be contained indefinitely and that may be addressed through future M&A activity.

Due to the prospect of large profits, numerous hardware OEMs were attracted to the imaging industry in the 1990's with each of them deploying similar razor and razor blade approaches to the business model. There should be little disagreement on the following four points:

After accounting for these marketing and channel expenses net OEM margins may not be egregious but, the fact remains that consumers are the ones subsidizing these expenses by way of higher prices. The elevated prices provide financing for advertising campaigns that influence consumer spending habits and reseller stocking decisions. As a result, distortion of product distribution in the sales channels has occurred and, without the collective blocking power of the OEMs and big-box resellers, it’s likely lower priced aftermarket products would have a higher market share.

For the same reasons new OEMs were attracted to the industry, so were manufacturers of aftermarket supplies. Availability of aftermarket alternatives should be a major factor in keeping the market “honest” and reducing average prices paid by consumers. It only requires a quick look at the Amazon marketplace to uncover many examples of OEM brand products selling (for example) at $100 and equivalent performing, off-brand cartridges for as little as $10.00. As a result, many consumers now purchase off-brand products through this channel because the price differential is so great the perceived risk of a potential product failure is virtually eliminated.

THE POTENTIAL FOR CHANGE

Small office / home office consumers have demonstrated they will buy low cost off-brand product from the Amazon marketplace and, as a result, these consumers have emerged as a force for change. However, without the business consumer prepared to purchase likewise, then today's close relationship between the OEMs and their big-box distribution partners is unlikely to be materially affected, so the high market share and prices commanded by the OEM are also unlikely to significantly change.

The key driver for M&A activity is usually increased market share and reduced cost through scale. There are few acquisition opportunities remaining in the aftermarket imaging supplies industry that may result in an increase of the acquirer’s market share. None of these potential combinations would directly affect the overall share between OEM and aftermarket which would remain around an 80/20 split.  As a result, any acquisition upside is limited and the risk therefore greater.

Unless there’s a fundamental change in distribution that facilitates a shift in overall market share, the likelihood of continued acquisitions are reduced.

In order for a distribution shift to take place, either U.S. business has to buy through the Amazon marketplace, big-box retailers and distributors have to alter their models and allow a higher percentage of aftermarket products for resale, or some other, as yet unidentified and sizable change in the distribution model has to take place.

Despite the challenges and low likelihood of any significant changes to the current distribution model, powerful, pent up forces exist and must be expected to eventually drive change. However, the question remains whether this will be driven through an acquisitive or organic process.

Is it going to be the Amazon market place and acceptance of U.S. businesses to use this platform for purchasing their imaging supplies, or some other change to the distribution model that’s going to drive a fundamental shift in market share?  However unlikely it may be, nobody should think such a market share scenario is outside the realms of possibility. In parts of Asia the OEM market share has already plummeted to 20% - why couldn’t the same happen in the U.S.? The recent initiatives from Amazon to drive their Business Services program must continue to be observed with great interest.

The independent resellers deserve a mention for their potential role in any change to the distribution model and future market shares. Despite the industry consolidation that has taken place, there remain thousands of smaller independent resellers. Collectively they form a giant sales force and, if organized or consolidated, could pose a threat to both the existing distribution model and development of the Amazon model into B2B channels.

However, the problem is how to accomplish the organization and consolidation of a large group of independent entities, regardless of their individual motivation and willingness to transform their businesses. Roll-up of office supplies dealerships has been attempted in the past, for example, Danka and USOP, and smaller scale roll-up strategies remain underway. Buying Groups provide opportunities for organization but their impact on distribution appears to be limited. It’s unlikely, even for a well-financed entity, to be able to accomplish a large scale roll-up and then implement the behavioral changes on a large group of individual entrepreneurs that would lead to a significant change in the distribution model.

Amazon has the muscle for disruptive change but who, apart from the freight companies, makes any money with their model?

The Amazon marketplace has become an online outlet for many independent resellers because they don’t know how to drive traffic to their own e-commerce portals. A faceless transaction results, and the nature of the marketplace drives prices down, benefiting the end-consumer greatly, but the margins for the manufacturer and distributor are very small.

This does not appear to be a healthy end-game for the aftermarket industry, or ultimately, for the consumer to be facing.  If the aftermarket manufacturers cannot make reasonable margins long-term then they will not be around to provide a lower priced option.

It’s difficult to predict precisely what direction the industry will go and how significant a role mergers and acquisitions will play on this journey. Perhaps adoption of technology by the independent resellers and its seamless integration with the internet and e-commerce will play a more prominent role than M&A.

Looking at disruptive technologies such as Uber and AirBnB – these have been facilitated through the use of technology and connecting supply and demand in an incredibly efficient way that was inconceivable just a few years ago. The dollars at stake in the imaging supplies industry, and the status quo that currently exists, combine to mean it’s ripe for change and, eventually, that change is likely to take place.

For more information on the potential for change in the imaging supplies industry and the potential for independent dealers to achieve a business transformation and play a major role in disruptive change please click on the button below to download our free e-Book.