Most industries experience consolidation - there are few exceptions and the office products and supplies industry is certainly not one of them. In Part I of this series I explained my rationale for believing the aftermarket had passed a significant tipping point and that it was no longer possible for the OEM's to litigate it out of existence. In Part II, I explained the OEM merger endgame, their power over the Tier-1 resellers, and the developing opportunity for the Tier-2 resellers to increase market share. Now, I'm going to focus on the aftermarket manufacturers and their merger endgame.

There are three segments of the office products industry to assess when examining the mergers endgame;

2. The Aftermarket Manufacturers (The subject of this Part III)

3. The Resellers (Will be examined in Part IV)

The aftermarket manufacturers in Western Markets such as the United States and Europe have already gone through significant consolidation. There aren't so many players left besides the Clover Imaging Group, LMI Solutions, and Turbon.

In China, although there are three or four dominant players, there are still hundreds of smaller enterprises and the consolidation process still has a way to go.

The aftermarket manufacturing landscape can be represented quite simply as shown in the image below. 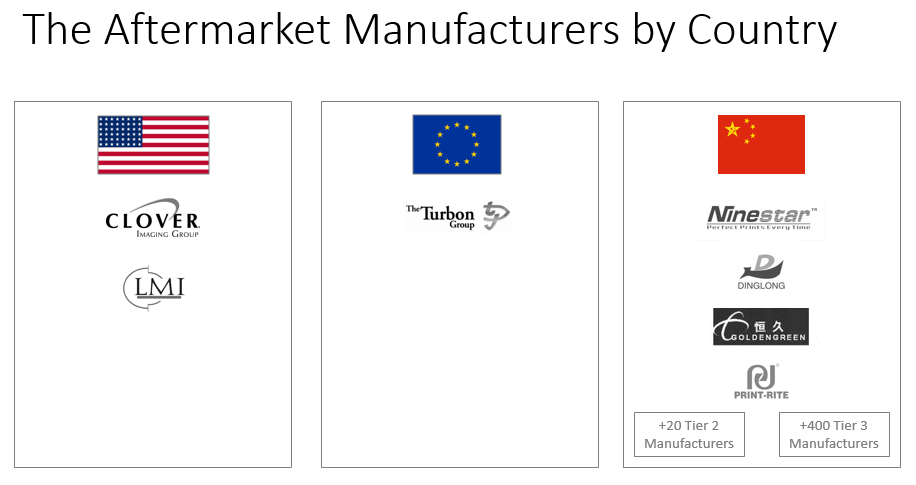 In order to have an understanding of how the aftermarket merger endgame may play out, it's necessary to understand how influential the roles of the new Chinese manufacturing "superpowers" are expected to be. One way to start to accomplish this is to look at the market capitalization table below.


What should be immediately apparent from this table is:

In mid-2015 Ninestar (Apex), after its $1.5 billion public offering, acquired Static Control for around $60M. In doing so, it eliminated its major competitor in the cartridge chip business and established a foundation for distribution into the United States.

In a transaction due to close at the end of 2016, Ninestar / Apex Technology (in association with PAG Capital and Legend Capital Management) is acquiring Lexmark for $3.6 billion in cash and, for the first time, there's a major crossover event taking place between aftermarket and OEM. What will we be calling Ninestar / Apex in the future, an OEM or aftermarket company?

Hubei Dinglong has seemingly emerged out of nowhere and assembled a vertically integrated manufacturing organization through a series of acquisitions including RE Tech, Kolion and Mito. The first of the top tier Chinese aftermarket manufacturers to go public back in 2010 and now reporting over $1 billion in annual sales.

Suzhou Goldengreen Technology made a major distribution play into western markets with the 2015 acquisition of the Cartridge World global franchise and subsequently carried out a modest IPO on the Shenzhen Stock Market during mid-2016.

Print-Rite, founded in 1982 (twenty-years before Ninestar, Dinglong and SGT), and the early pace-setter as Zhuhai started to earn its title as the "Imaging Capital of the World", seems to have lost its strategic direction despite its vast intellectual property know-how and compatible new-build cartridge technology. Apart from a small stock offering related to its ink business, there's been no obvious activity necessary to keep pace with the three leading players merger and acquisition or capital raising events.

Clover was the 900-pound gorilla until the mid-2015 acquisition and capitalization events at Ninestar took place. Their model is largely based on remanufacturing for which, as we've previously explained, there's a cost disadvantage compared to new-build cartridges.

Clover doesn't have the technology to make new-build compatibles, although they certainly have the relationships to outsource them should they choose to do so. However, should they be forced to go down this outsource path, they'd end up with a higher cost and a similar problem to that which HP experienced due to their dependence on Canon as a supplier. Longer term, such an arrangement would not be an ideal solution because of the higher cost.

As a result, Clover is caught between a rock and a hard place with regards to the expected transition from remanufactured to new-build cartridges and lacking the technology to move along with this transition.

Now Clover has to decide whether or not it wants to be part of the merger endgame. No, then they have to sell. Yes, then they have to acquire new-build technology which, in turn, means they must acquire a Chinese manufacturer with the necessary capabilities.

LMI Solutions is a private, U.S. based company that's experienced rapid growth over the last five-years during which time has carried out some strategic acquisitions, including Global and Printers Direct for remanufactured printer capabilities and also PartsNow for repair parts. Incredibly strong inside its dealer base with industry-leading Managed Print Programs. Although selling most of its cartridges under cost per page programs successfully shields them from transactional price comparisons, their model is based on remanufactured cartridges. They don't have strong core recovery programs (like Clover does) and have the higher costs associated with remanufacturing. At some point I'd expect them to sell to a manufacturer positioned to survive the endgame.

Turbon, a long established German company founded in 1962 and around since the times of molding plastics for the ribbon industry. A closely held public company, listed on the German Frankfurt Stock Exchange, with around $120M in annual sales and consistently providing positive returns to its shareholders. A survivor no doubt, but a player in the merger endgame, I don't think so. Again, a company that doesn't have the new-build cartridge technology, and without strong managed print service programs, they are very exposed to transactional cost comparisons. Ultimately, the new-build cartridge technology is expected to win over the remanufacturing model.

So .. what's the outlook for the endgame?

There are only two scenarios - one with Clover and one without.

If Clover stays in the game, then look to them acquiring Print-Rite. It's simple, if they don't then they can't get access to new-build cartridges and, because the remanufacturing model ultimately loses to the new-build model, they will fail without new-build. Unfortunately, there's nothing simple about a U.S. company acquiring and operating a Chinese company.

Look also to LMI Solutions and perhaps even Turbon falling to the Clover Imaging Group if they (Clover) decide to stay in for the endgame.

If Clover decides to exit, then who would acquire them? Perhaps a new private equity partner buys in and they remain an independent entity for the endgame, just with different investors. However, I think this outcome is less likely as it may be difficult to get sufficient interest from private equity and a satisfactory valuation as part of a mature industry, probably experiencing a flat top-line, narrowing margins, and increasing competitive headwinds.

That leaves a strategic acquisition and it can only be by one of the top tier Chinese companies - i.e. Ninestar, Dinglong or SGT. 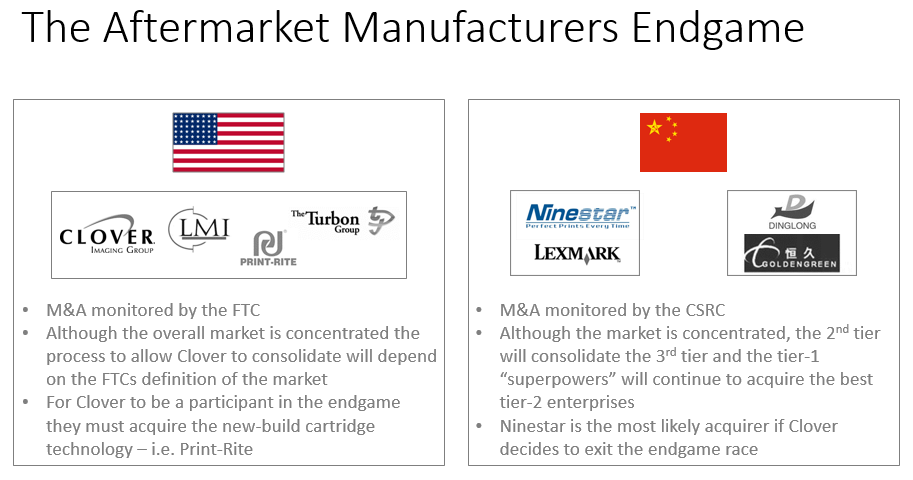 As can be seen from this graphic, I've favored Clover to remain for the endgame and, ultimately, for there to be three entities left standing; Clover, Ninestar and a Hubei Dinglong / SGT combination. We'll see, in the not too distant future I think, what path Clover actually chooses to go down, and will then have a more definite picture of what the final aftermarket manufacturing landscape will look like.

My next blog in this series will focus on the resellers merger endgame and, in particular, some of the implications of the busted Staples acquisition of Office Depot. The theme will continue to be the impact of the Chinese money, the end of the remanufacturing model, and the likelihood of more widespread access to, and consumer acceptance of, the aftermarket alternative.

For additional reading on the state of the office products and supplies industry, and to help develop a better understanding as to why there are still great opportunities in the office products and supplies vertical, please click on the button below and download a free copy of our e-book. This contains valuable information on the industry, how to take advantage of the current conditions and to help understand a strategy for achieving profitable sales growth.