As were already established, there are three segments of the office products industry to assess in order to examine the mergers endgame;

3. The Reseller's (Examined in Part IV)

There's already crossover between the OEM and aftermarket manufacturing sectors with Ninestar / Apex Technologies acquiring Lexmark, so I think it makes sense to summarize the manufacturing consolidation as one segment.

The video clip below contains an animation illustrating a potential outcome of the manufacturer's mergers endgame that could take place over the next few years. Of course, I don't have a crystal ball, so it'll be interesting to see what each of the upcoming events actually are, and how each of them affect future thinking versus the current projection.

Who would have thought Apex would acquire Lexmark and, who would have thought HP would be acquiring Samsung's Printer Business? So far as my thinking was concerned both of these deals came out of left field. So, the structure of the fully consolidated industry as projected in this animation may be no more than educated speculation but, it's a format that will be updated after each event does take place, and will help us to project the final outcome well in advance, as the various currently possible options are eliminated one by one.

It's difficult to see Xerox surviving as an independent enterprise in the final stages of the consolidation. Already we've seen Lexmark and Samsung throw in the towel and a similar outcome may be expected for Xerox in the not-too-distant future. However, any deal as I've speculated with HP as an acquirer would be likely to be closely scrutinized by the FTC and the outcome by no means assured. If HP is unable to acquire Xerox for anti-competitive reasons, then look to Canon potentially stepping in.

Of course, I don't know the actual five or six names that may eventually be heading up the fully consolidated industry I've projected but, in short, I believe that's about the final number of enterprises that will be left standing at the conclusion of the endgame. Subject to the thinking of the Fair Trade Commission in Japan, it's not unreasonable to speculate that their industry may consolidate into two main segments - the A3 players and the A4 players, with perhaps Canon remaining as a standalone.

For the aftermarket manufacturers, although it's likely the endgame will be dominated by the Chinese, I'm hopeful there will be three major entities left standing. Ninestar of course, an Hubei Dinglong / SGT combination and, finally, a Clover, Print-Rite, Turbon and LMI combination. However, it's possible Clover may decide not to stick around for the endgame, so it could look quite different to my current projection with, ultimately, just one or two Chinese entities left to represent the global aftermarket interests.

As is shown in the table below, a handful of global manufacturers with combined annual sales of nearly $160 billion, a CR3 of 83% and HHI of 2,500+, spells out an industry defined as highly concentrated with potentially monopolistic power. One country and one government agency would most likely not permit such a consolidation. However, multiple countries and multiple government agencies assessing mergers and acquisitions in light of their own individual markets, not a single global market, may well allow their individual consolidations to take place. 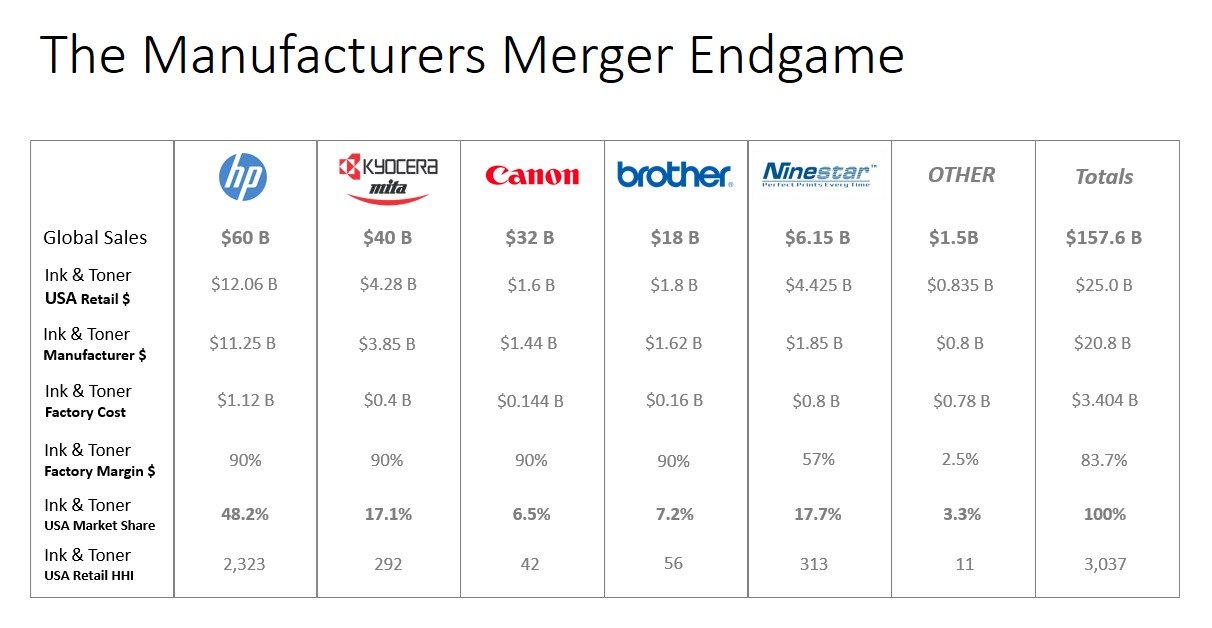 In drilling down to evaluate just the ink and toner segment, (2016 U.S. market size of $25 billion in retail dollars), and as would be supplied by these five or six enterprises, the market would be even more concentrated albeit with a slightly lower CR3 of 72% but with an HHI of over 3,000.

I believe the margin dollars on the imaging supplies are one of the key drivers of the consolidation in the industry. The strongest manufacturers will participate in the mergers endgame only if they believe they can protect the existing business model and the high margins earned off the supplies. Of course, merging two large organizations leads to other synergies that may be vigorously extracted but, the crown jewels for future profits are ink and toner.

This is so important for an independent reseller to understand because it means the days of $100 OEM brand cartridges are not going to go away anytime soon. Even if the overall market for office products and, in particular, ink and toner is entering a slow decline of 1% or so per year, then it will remain a large market for the foreseeable future, with plenty of growth opportunity for savvy reseller's attacking the top-end of the market.

I'll be going on to discuss the Consumer Adoption Curve (as it relates to aftermarket ink and toner cartridges) and the location of the expected battlegrounds for market share in the next two blogs in this series so I'm not going any deeper into these here. Suffice to say, these are the subjects that should be of most interest to independent reseller's looking for growth and opportunity over the next decade or so and (once they have a solid understanding of the market opportunity) just why it's going to be around for the foreseeable future.

As was explained in Part IV of this series, at the broadest level, the reselling sector of the industry in the United States is not concentrated and remains very competitive. However, what we learned in May 2016 is that the FTC in the United States would not allow the merger of the two biggest reseller's, Staples and Office Depot, after they narrowly defined the market for office supplies (excluding ink and toner) in the B2B segment and determined the merged entities would have monopolistic power. Despite the failure of the proposed acquisition, I don't believe this means either Staples or Office Depot is off the table in terms of future M&A activity - just not with each other. 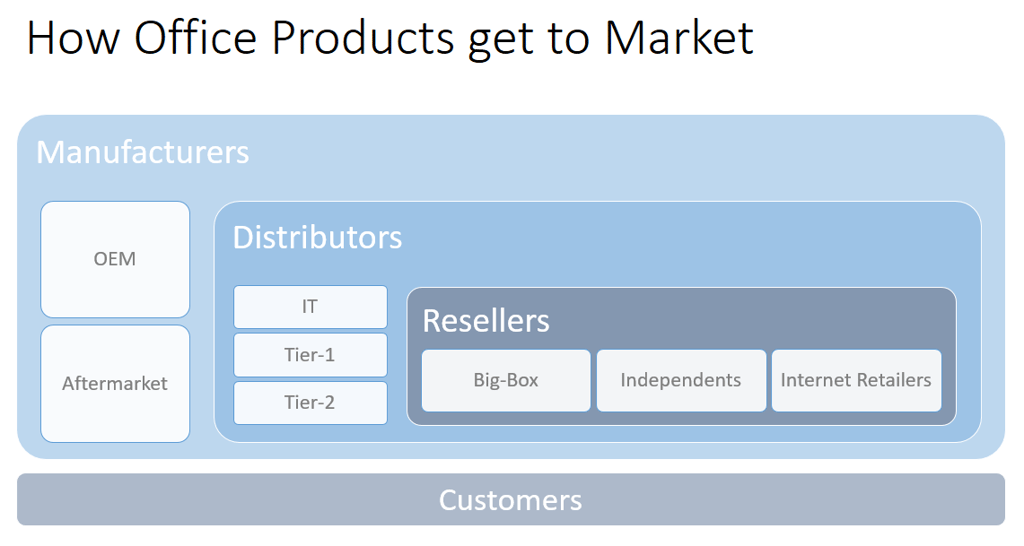 I think the outlook for the mergers endgame and the reseller's in the United States needs to be considered in the context of the emergence of the three Chinese aftermarket superpowers (Ninestar, Hubei Dinglong, and Suzhou Goldengreen Technology) and their probable desire to increase market share for their products in the United States. With Ninestar's 2015 acquisition of Static Control and SGT's acquisition of Cartridge World, we've already seen evidence that the Chinese will acquire U.S. companies with the distribution relationships that will further their goal to increase market share. We haven't talked specifically about it before, but China-based Han Group is in the final stages of closing their deal to acquire Ingram Micro, a major Information Technology distributor, for over $6 billion. Ingram is a significant player in the distribution of OEM ink and toner cartridges and, it may not be beyond the realms of possibility, that one or more of the Chinese aftermarket superpowers are already talking to Han Group about the possibilities of placing Chinese products into distribution through Ingram Micro.

In this context, think about the Chinese potentially acquiring either Depot or even Staples. Now, I'm not suggesting that an aftermarket manufacturer such as Ninestar or Hubei Dinglong would go in this direction, but the Han Group or other similar Chinese investors may be interested. Regardless of who it may be (if anyone) then you can imagine the likelihood of relationships being leveraged to help place Chinese products into distribution through their new owners. Events of this nature just have the potential to completely change the way we've become accustomed to the existing "cartel" of OEM's, Tier-1 remanufacturer's and Tier-1 reseller's operating.

Regardless, even if an event of this nature was to take place, I still don't see much likelihood of the existing Tier-1 reseller's pricing model (forced upon them by the OEM's and adopted by them for the aftermarket alternatives) will change. A Chinese investor acquiring (for example Office Depot) would not want to see that investment potentially compromised with radical strategies resulting from increased aftermarket cartridge sales at the expense of OEM. Loss of the OEM rebates for failing to achieve pre-determined sales quotas would be a risky strategy to follow - particularly as Staples (in this case) would be well positioned to compete for accounts potentially compromised within an aggressive "OEM to aftermarket" conversion strategy.

So, just like with the endgame for the manufacturers is not likely to disrupt the existing cartel arrangements for pricing and market shares, then I believe the same is true for the mergers endgame for the Tier-1 resellers. Knowing this to be the case should provide significant reassurance to the Tier-2 reseller's of office products that, looking "up" to the "Blue Ocean" of Office Depot and Staples customers and competing for that business, rather than looking "down" to the "Red Ocean" of the dog-eat-dog internet based e-commerce marketplaces, will be a significant growth opportunity for many years to come. Again, we'll explore this opportunity in the two upcoming blogs in this series that deal with the Consumer Acceptance Curve as it may pertain to the supply of aftermarket ink and toner, and then to the battlegrounds we expect the fight for market share to take place in.

I can't finish this section on the reseller's merger endgame without a mention of Amazon. Although I'll cover their possibly disruptive role in my upcoming blog dealing with the battlegrounds for market share, it's feasible they could enter the mergers endgame with an acquisition of either Office Depot or Staples. However, I think such a wildcard move would really test how serious Amazon is about this category as it would represent a significant shift from their existing growth strategy and involve considerable risks. For now, I'll put an event of this nature low on the probability charts but, then again, don't forget I didn't see Ninestar acquiring Lexmark or HP acquiring Samsung either!

Why not check out our free eBook with a comprehensive assessment of the office products industry and the opportunities to develop significant sales growth in a challenging environment despite the ongoing consolidation of a mature industry.